Our sight-seeing list checked off, it was time for some major souk shopping. We decided to walk back towards the plaza for lunch and check out a few shops along the way. It took no more than two minutes of walking before Jason was sucked into negotiating for Berber wedding blankets. 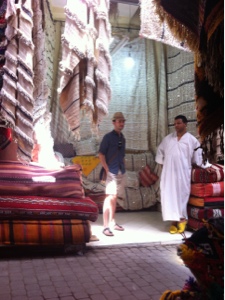 As Jason browsed the "bling bling" as the shopkeeper called it, the shopkeeper asked him if he was an interior designer. Jason said he was not. The shopkeeper expressed surprise since, "You have such style - you are dressed like a designer!"

"Oh, good grief," I thought. "If he compliments Jason on his handwriting next, he'll buy the whole shop."

As the men delved into the thick of things, the shopkeeper's assistant set up a stool for me. I watched the negotiations, enjoying the breeze from their ceiling fan and highly entertained by the process, by the shopkeeper's insistence that Jason should pick up a blanket for me as well, and by this exchange:

Shopkeeper: (to Jason) Is she a good cook? (gestures at me)
Jason: (to me) You like to cook, right?
Shopkeeper: If she is a good cook, she uses Moroccan spices. My cousin has a spice shop. I will show it to you. (to me) You can buy spices for your cooking.

Yup. Despite calling me "The Boss," my interests had been reduced by the shopkeeper to spicy cooking and the chance for some bling-bling in the bedroom.

When the deal was done and Jason's load of purchases were wrapped, the shopkeeper insisted on showing us the spice shop. "It's free to see, no charge!" He then picked up Jason's parcels and headed into the alley. We had no choice but to follow the hostages, and we wound up inside a brightly painted shop lined with glass jars of all colors and textures. 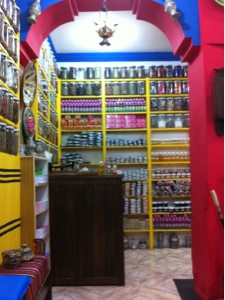 The carpet shopkeeper then left us in the hands of a skinny man with a smoker's voice who proceeded to give us a 10 minute lesson on the varieties of spices and oils they offered and a silent young woman who walked each open jar and vial over to us and offered them to be smelt. As the lesson progressed from powders liquids, the assistant would take our hands and rub each new sample onto a different part of each of our arms for us to smell. By the time we managed to excuse ourselves from the demonstration, I had a variety of tingling sensations in patches on my arms and lips, my stomach was being cleansed (a description that had me mentally checking the location of my Cipro) by a glass of eucalyptus tea, and I smelt like, well, the best parts of Marrakech. My favorite part of the demonstration was when the shopkeeper poured out about a tablespoon of small seeds onto a hand-sized piece of black cloth. He twisted it into a bundle and crushed the bundle against his palm, grinding up the seeds. He then bent down, shoved the bundle against one of Jason's nostrils, plugged Jason's other nostril with his finger, and commanded Jason to smell. Jason's eyes, already wide with the shock of the nostril molestation, grew even wider when he took a whiff of whatever was in that bag. I found it less entertaining when the same treatment was inflicted on me and found my sinus cleared out my the overpowering smell.

We eventually extracted the hostages and ourselves from the spice assault, and turned our attention to lamps, embroidery (pillow cases!), and a fancier carpet shop (where Jason picked up a small one for his bathroom) before arriving at a carpet place we had been impressed by on our first foray to the souks. The assistant woke up the napping owner, and soon the floor was covered by a pile of carpets. After at least an hour of browsing, choosing, and negotiating we each purchased two carpets. (It is a dangerous thing to go to a country like Morocco when one is being forced to replace one's flooring!) 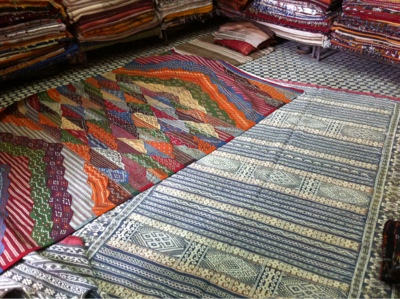 The assistant, Abdul, did a remarkable job wrapping our carpets for shipping. He whipped out a giant needle, threaded it with yelllow twine, and sewed the rolled carpets into a plastic-wrapped bundle. 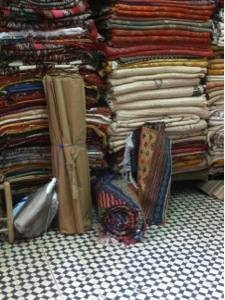 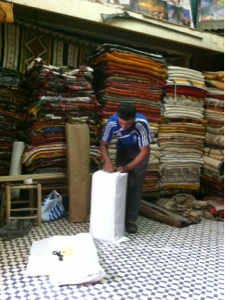 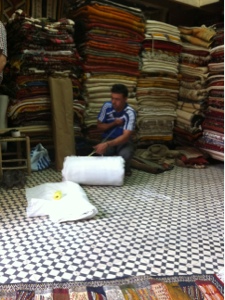 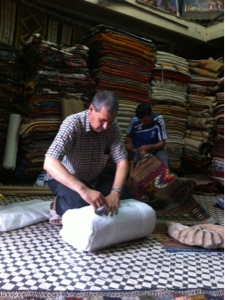 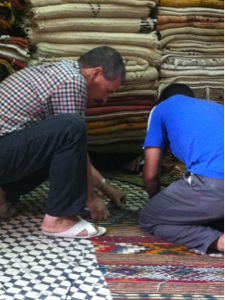 The shopkeeper then handed us a black marker to write the shipping address on the package. 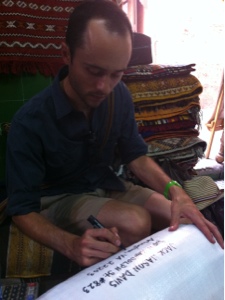 The process took longer than we expected, but the shopkeeper kept us hydrated by providing two big bottles of water; the shopkeeper's cat kept us entertained by meowing pitifully, stretching out on top of the carpets I was buying, and by bringing in an injured-but-alive little bird and dropping it with a meow at the feet of the shopkeeper on the carpet Jason was planning to buy; and we got a lesson in fringing when Abdul cut and refinished a runner on the spot per Jason's request. 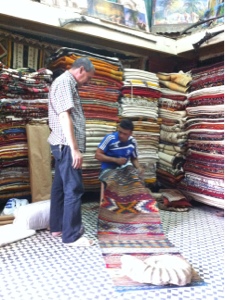 I slipped out during the fringing to by a bedspread next door. When we were finally ready to go, Jason got a hug from the shopkeeper while I got two kisses on the cheek and one on my aromatic hand. We bade him farewell as Abdul hefted our bundles and carried them at a breakneck pace through the souks, across the Djemaa, and back to our riad. Alas, we not only missed lunch due to our lengthy shopping, but we missed the open hours for the post office as well. Since we are leaving first thing in the morning, our purchases are coming with us, at least until we get to Fez. 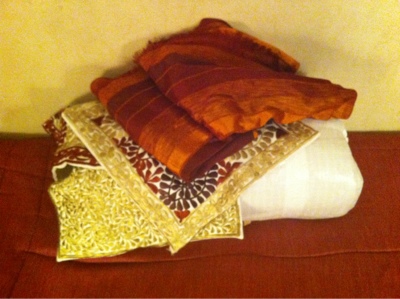