Jason turned to me suddenly as we were seeing the sights of Barcelona Friday. "You seem to have shut down," he said. "What do we need to do?"

It was true. I was dragging, and it wasn't hard for me to figure out what I needed. "I need to hydrate and I need a bathroom," I declared.

We were near the cathedral where St. Eulalia's entombed. She was martyred at the age of 13. Apparently she was stripped naked as part of her torture, but "a miraculous snowfall" preserved her modesty. While I bet she would have liked a warmer veiling, I was a bit envious of Eulalia as the sweat dripped down my neck. It was hot. Not Marrakesh hot, but Barcelona was also more humid than the other places we've been on this trip, and I was parched.

My being in charge lasted about five minutes before Jason seized the reigns back from my lagging, indecisive self and marched us into a cafe. A trip to one of the smallest bathrooms I've ever seen, a bottle of water, a can of Fanta Limon, and a salami sandwich, and I was ready to hit the town running again. Well, not so much running as leisurely strolling, but still. 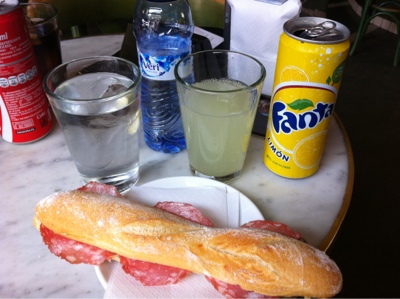