I've never had any hesitations with spending money on show tickets. Where others might balk at the idea of spending 50, 70, 100 dollars for a few hours of entertainment, I always felt it was worthwhile, even when the shows I'm watching do not live up to my hopes. It's the price of theater, and theater is my hobby.

In the last year or so that financial philosophy has grown to include meals. The cause of the adaptation is hardly a mystery, but rather the combined effects of a friendship with Jason, a Thanksgiving celebration in Paris, and the discovery of what a difference a Michelin star makes.

Between Paris, New York, and this trip we've eaten very well this year and we added our seventh Michelin restaurant to our list Friday night. I have spent several hundred dollars on seven meals, a feat of luxury I never expected and that still amazes me in my more prudent moments (such as whenever I think about the repairs still to come in my poor flooded home).

Yes, they are expensive as meals go, but they are also just as memorable and pleasurable as seeing a fine piece of theater or paying the entrance fees to a few museums. As we've eaten this week we've reminisced about previous meals, sighing over the memories of the favors, the presentation, the ambiance, the service.

"Luxuries once tasted" indeed. This is a habit I have no desire to break.

Hisop is a tiny (8 tables) restaurant with minimalist design and a highly attentive waitstaff. We enjoyed the tasting menu (again, I'm a huge fan of these now. When we went to dinner last night and I actually had to make my own choices about what to eat and I only got three items instead of a wee bit of many, I missed that style!), which I am going to defer to Jason's detailed blog post about it since I am posting by phone at the airport, making pictures tricky. The food was splendid (two kinds of olive oil served with biographies for us to compare!) even the items I normally wouldn't touch (sardines, for example) I ate without worry because I knew they would be excellently prepared.

Ah, Michelin. It's a good thing you don't have a red book for Denver. 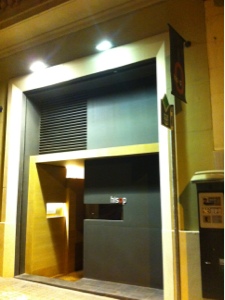